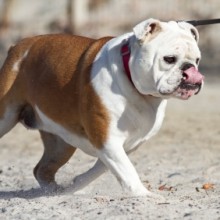 The Bulldog is seen by some as the national dog.  The modern Bulldog bears little resemblance to the bull-bating dog of previous centuries.  Encouraged by the show ring breed standard, he has become shorter legged, wider chested and extremely short faced.  His temperament varies.   His exercise needs also vary depending on his ability to breathe and  regulate his body temperature. It is advisable to choose a Bulldog puppy from parents of a less extreme type. Average lifespan 6 years.

Note that efforts are now being made by the Bulldog Breed Council to breed away from these extremes.