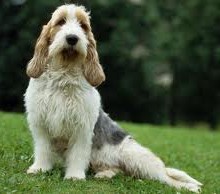 The Grand Basset Griffon Vendeen, or GBGV, apparently was used to hunt rabbit and hare. He arrived in the UK from France in the 1990s. He is typically lively and active with a tendency to ‘escape’ when there is a tempting distraction. He should make a suitable family pet but needs plenty of activity to keep him physically and mentally happy. He will love off lead walking but first needs to be trained to return when called. He’s a dog with character and a rather loud voice. His coat is long and needs daily grooming.

The GBGV’s coat will easily harbour dirt and debris which could encourage skin problems and must be kept clean and free from tangles. Similarly his long, hairy ears could encourage ear infections unless kept clean His ability to see could be hampered if hair around the face is not trimmed.

Note there is a lack of health information on this breed due to its recent introduction into the UK.