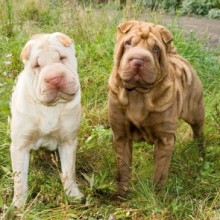 The Shar Pei breed originates from China where he did work as a hunter and guard dog – also as a fighting dog.  For this reason, some Shar Peis may be prone to aggression.  In his native country his features (chiefly his wrinkly skin) were much less exaggerated than many Shar Pei you see today.  He is a large, lumbering dog who needs to live in a house with a garden.  He has short, bristly hair which needs grooming regularly.   He needs some exercise every day. In the interests of dog health and welfare, you are advised to avoid the extreme type of Shar Pei in favour of a leaner, more muscular dog with far fewer wrinkles.